I like to start my mornings with a cup of coffee and some quiet so that I can think through my day. It’s good to think ahead and plan for anything that might be a conflict in schedules or difficult meeting so that I can prepare my mind for come what may.

Though I do my best to plan for events, meetings, and chores, often times I’m caught off guard by the attitudes and emotions other people convey in their day-to-day activities. It’s in these times that I can be derailed from what I was trying to accomplish.

So if I don’t prepare my mind for the jerk who cuts people off on the road or the rude receptionist at the office, I’m certainly setting myself up for failure! The reality is that each day has its own share of troubles and grief – even Jesus said so! – therefore it’s foolish for me to not assume that tomorrow I will have opportunities to lose my cool.

It’s not like I’ve had a tremendous track record for keeping my composure under stress or maintaining a great attitude when dealing with frustrating people when I haven’t planned ahead, nor have I done well when temptation rears its head and I didn’t plan for it. In fact, I would estimate my performance pretty poorly!

In the Bible, the book of Peter warns us to prepare our minds…

This wouldn’t simply make our days easier, it would set us up to be ready to show the LOVE of Christ to people who, under normal circumstances, we may have written off because they frustrated us, disappointed us, or rejected us.

Take some time today to prepare your mind so that you can exercise some amazing self-control, share the love of Jesus, and find yourself walking in victory instead of regret!

In school, the teacher would occasionally pop a test or quiz on us announced; this was meant to test if we had acquired the information that had been given to us, to test if we had it IN us.
This was, of course, a matter which would cause great amounts of anxiety in all the students because we weren’t sure if we had the information in us! Unfortunately, the only way to tell from time to time was to test us.
Inevitably, there was always that one student in every class who seemed to have no problems with tests. They wouldn’t study or do the assignments or homework, yet he/she always passed every test, pop quiz, or exam easily.
I often wondered if there was an extra class I had missed because they seemed so confident. Turns out, they were just really exceptional students who acquired information much more quickly than the rest of us; they were confident because they KNEW they had the required information at their fingertips.

In scripture there are two types of testing of our faith that occurs; one is to produce something inside of us (James1:3), the other is to prove what is already there, such as what’s about to happen to our friend Abraham in Genesis 22:1.
Many times, we’re in need of God to produce something greater in us, endurance, character, and hope, etc. but it’s very important that we understand the God has already placed FAITH inside us!
In a discussion with His disciples, Jesus had just finished telling them to forgive anyone who repents regardless if they offend and repent as many as seven times in a day, to which the disciples responded, “Increase our faith!” as if to say, “We don’t have enough to cover that sort of problem”.
I absolutely LOVE Jesus’ response to them from Luke 17:6;

6He replied, “If you have faith as small as a mustard seed, you can say to this mulberry tree, ‘Be uprooted and planted in the sea,’ and it will obey you.

You don’t need MORE faith in order to deal with whatever test you’re going through, what you need is a GREATER REVELATION of what God has already placed in you! 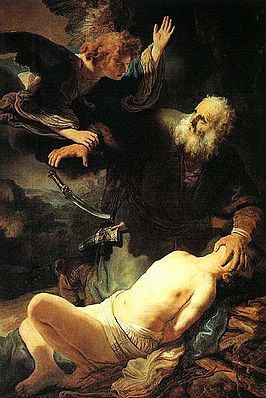 How do you get the greater revelation?
The test.
God tests us to REVEAL what He’s already done in us.
Is the test that you’re going through meant to spiritually develop you, or is God showing you what’s already true of you?
Do you know what is already true of you?
He has already given you plenty of faith to make it through this test.